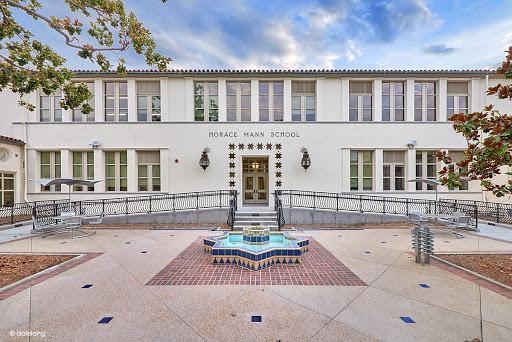 On March 18, 1929, construction began on a two-story, 30-room Spanish style school building. In July, the school was named Horace Mann School, and 307 students and 11 teachers entered its doors in Kindergarten through sixth grade on December 9, 1929. The school was officially dedicated on March 21, 1930. The first seventh grade students began attending in February 1930, and the first eighth graders arrived in the fall of 1930. The first graduating class of 30 students was in June 1930. In 1932 and 1933, the school was expanded, closing off most of Arnaz Drive for playground space and to ensure safe passage for the students between the buildings. In 1962-63, the music, art and industrial arts wing were remodeled. In 1966, the auditorium was reconstructed, and in 1968, the school's tower building was opened. A faculty parking structure, with middle school classrooms above, was built in 1975. Additional property on Robertson Boulevard was acquired in the 1980s.

Horace Mann has had eleven principals

The Horace Mann PTA (Parent Teacher Association) is an all-volunteer, parent/teacher partnership organization. Teachers and administrators rely on PTA support to enhance and enable the academic and social experience for students at Horace Mann. Horace Mann PTA Presidents have a storied history of community involvement.